Henk van Eeken (*1956) comes from a family of furniture makers.

His grandfather Hendrik van Eeken (1889 – 1970) obtained the title of master furniture maker in 1918. In 1919 he established a cabinet-making business in Drachten. As a consequence of the economic crisis of the '30's, the company had to close down in 1935.

After he got through the crisis and the Second world war as a traveller in furniture and a rationing clerk, grandfather Hendrik van Eeken established a billiard-making business in Amersfoort in 1951, which developed to one of the largest producers of billiard-cues in Europe under the leadership of father Jan van Eeken (1930 - 2009).

Henk van Eeken grew up in the workshop of his father and grandfather, where he learned the basic principles of woodworking. After extensive training as a furniture maker, he was educated as an organ builder in several organ building workshops in the Netherlands, where he learned pipe making and voicing, among other crafts. 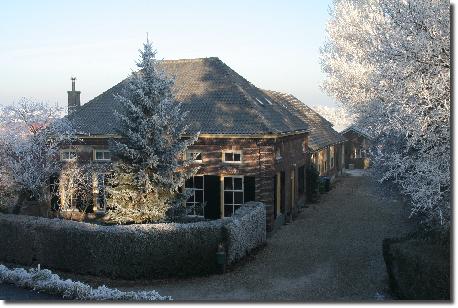 The workshop in Herwijnen.

The objective of the company is to build organs that have an artistic expression comparable to that of the many beautiful historic organs in Europe.

In order to be able to build organs as good as old, much research is carried out on historical organs. From 1990 a growing collaboration has therefore grown up with various scientific institutes.

As a result of this research, the insight has grown that the quality and the expression of historical organs originate from the materials used as well as the way these materials are treated. Because this is a complex interaction of many factors, following the original production process offers the best preconditions to obtain a comparable result, since only then, as a result of the historical processes, can the specific qualities and behavior of the product be obtained in the most natural way.

Henk van Eeken uses the principle of process reconstruction in the construction of new organs as well as in the restoration of historical organs. This means that the original construction process for each organ-building style is duplicated as accurately as possible.
Following the methods of Arp Schnitger (1648 - 1719), Christian Müller (1690 - 1763) and Johann Heinrich Hartmann Bätz (1709 - 1770), the pipe metal for new organs is cast in the workshop on sand.

For restorations and for reconstructions of missing parts, the metal can also be cast in a classical way on cloth, depending on the model. The classical technique of casting on cloth, however, as described by Dom Bedos (1766) and Van Heurn (1805) among others, differs substantially from the modern method of casting on heat-resistant textile, fiberglass cloth or even glass.

Both in casting on sand and in classical casting on cloth, raw materials are used with a chemical composition very close to that of historical pipe metal. After the casting, the metal will be stored for about one year and only then planed by hand, because of the specific influence of the hand planing on the metal structure and the acoustical properties of the organ metal. 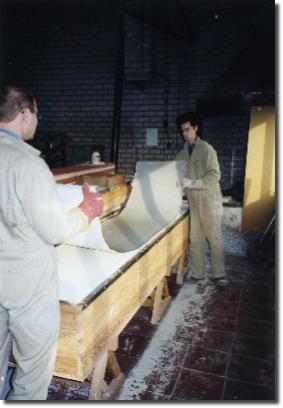 A freshly cast sheet of organ metal is lifted from the casting bench.

He is a member of the Board of Advisors of the Instituto de Organos Históricos de Oaxaca in Mexico.

In 2000, 2002 and 2004 he was a member of the jury for the ’Arp Schnitger Preis’, a prize which was awarded every two years by the Arp Schnitger Gesellschaft.

Henk van Eeken also worked for the research project COLLAPSE - 'Corrosion of Lead and Lead-Tin Alloys of Organ Pipes in Europe' - a project within ’The Fifth Framework Programme’ of the European Commission.

He was the Dutch partner of TrueSound - 'A Challenge for Materials Science: Bringing True Baroque and Medieval Sound Back to Life in Historic and New Pipe Organs', a project within ’The Sixth Framework Programme’ of the European Commission.

The new organs manufactured since 1982 have given the workshop an international reputation. Several historical organs have been restored and reconstructed, such as the Zeemans-Schmidt organ (1699) in the town hall of Etten-Leur and the Radeker/Garrels organ (1719) in the Magnuskerk in Anloo .

The workshop is also responsible for the maintenance of more than 100 organs. Among them are important instruments like the Jalinck organ (1708) in Westervoort and the Bätz-organ (1824) in 's-Graveland.
Henk van Eeken pursues an active maintenance policy, directed toward the clients’ interests. 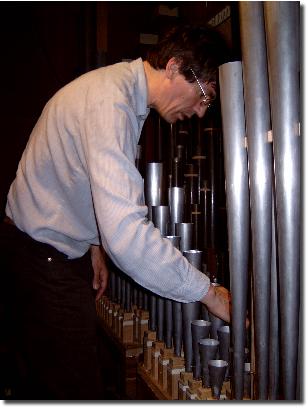 Klaas Veltman tuning the Friedrichs-organ (1808) in the Waalse Kerk in Haarlem.